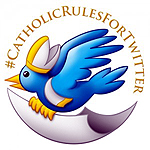 Forgive me, Father, for I have sinned – I missed the #CatholicRulesForTwitter meme that broke out on Twitter during April Fool’s Day. (Pulling off my competing stunt doesn’t excuse my absence.) Had I fulfilled my obligation that day, here’s what I would have tweeted.

Whew, I feel much better now that I’ve got that off my chest. Here are my favorite Twitter rules for Catholics that have already been handed down::

#CatholicRulesForTwitter If you're a regular Catholic you'll type out Tweets with your hands. Pious Catholics do it with their tongues.

Do not refer to tweeting bishops as "Your Twexellency." #CatholicRulesForTwitter

Mary turned to the disciples ans said, "RT whatever he says." #CatholicRulesforTwitter

Guilt induced by venial tweets can be removed via the delete key, mortal tweets however need sacramental cleansing #CatholicRulesforTwitter

Depicting the Holy Spirit as the twitter bird is permitted in devotional art posted on twitpic. #CatholicRulesForTwitter

On Fasts, only one full tweet is allowed. 2 smaller tweets permitted, if they do not equal a full 140 characters #CatholicRulesForTwitter

The #CatholicRulesForTwitter meme is another great example of how the faithful can have some fun on April Fool’s Day. I just wish 1) I thought of it, and 2) jumped on it earlier. So what’s your favorite rule?

This exchange on Twitter showed that it’s difficult to find how to unfriend or remove a connection from LinkedIn — but I’ll show you how below. You just need to know where to look.

RT @loisgeller: No sure how I "unlink people" on #LinkedIn. Do you? | Hmm, that's a good question.

@markalves Thank you for that info…going to delete people I don't know!

@markalves Thanks for the tip. There are a few I'd like to unlink too.

The tricky part is that you can’t remove the LinkedIn contact from the profile page. Instead:

Now why would you want to delete a LinkedIn contact? Unless the person is abusive or spamming the heck out of you, I’d err on keeping the connection even if you’ve had a falling out. Why burn the bridge? But, now you know how to do so if you ever need to — or if your pastor asks how to drop a parishioner from his LinkedIn address book.

In a week dedicated to conspicuous eating, football and shopping (and giving thanks), Twitter continued to elbow its way to the front of the line and the best spot on the couch.

BLACK FRIDAY CIRCULARS AND OTHER ADVERTISING
It’s impossible to miss the Christmas sales ads this time of year. Speaking of advertising, Tweetmeme covered the latest Twitter advertising plans, the NY Times warned A Friend’s Tweet Could Be an Ad (via @AndrewBates), and Twitter to launch paid business accounts from the Telegraph via @thebrandbuilder.

And what better gift than The Perfect Twitter Client via @scobleizer?

Given the theme of this blog, A Twitter App for Every Purpose Under Heaven grabbed my attention for gift ideas. If the headline concluded with “Under the Sun” instead, that would have led us to Brian Solis’s question of whether Twitter was a Nova or Supernova.

Even if you’re sure you’ve found the perfect gifts, it’s always a good idea to pay attention to a store’s return policy in case there’s a problem. But who do you turn to when Twitter is the merchant? Twittercism asks  Does Twitter Need an Ombudsman? (My answer is a resounding Yes, especially when Twitter keeps removing the Twitter help desk ticket option.) Dave Winer explains the customer service problems he ran into with Can Twitter Users Link Out.

After all that shopping, you might want to take a break at the official Twitter sports bar spotted by @TomMartin

Happy Tweetsgiving, everyone! And try out TurkeyTwitter for a roundup of #Thanksgiving tweets.

Sarah Palin starts her book tour, Barack Obama says he’s never used Twitter and Oprah says she’s hanging it up in 2011, prompting @caseywright to quip that maybe the Mayans were off by one year. In case the end is near, get your spiritual life together with the 10 Commandments for Twitter and the 7 Deadly Sins of Twitter. If it turns out we are going to stick around a while longer then learn from the president’s example and be clear in your church bio page about who is doing the tweeting–especially if you have ghost tweeters.

Speaking of things ending, what happens when your favorite URL shorteners go kaput? 301works.org is trying to help out. If that doesn’t work, try retweeting those links a lot, which you can now do seamlessly through Posterous.

Who can save a world gone mad? It’s a job for SuperTweet. SuperTweet advertising, that is, according to Robert Scoble. Is that enough to fend off the Four Horsemen of the Apocalypse? What about the 3 Ts of Business — Telling, Talented and Tangible? These are three traits that hold up for Twittering churches, too.

In football this week, it’s starting not to look like the end of the world for the Titans as they rack up some wins and where the NFL Commish joined a tweetup in the stands. But on the college side, the BCS’s new Twitter account is a calamity according to Shel Holtz at Social Media Today. And in our last bit of gridiron news, Twitter called its own audible at the (top) line with “What’s happening” replacing “What are you doing” as the welcome prompt.