It’s September 19 so it must be, what, Wedneday of the 24th week in Ordinary Time (or Twitter version)? It’s also International Talk Like a Pirate Day. Celebrate with this buried treasure from ChurchMojo.com we arrrrgh diggin’ up for this here special occasion.

To err is human. To arr is pirate! Happy International Talk Like a Pirate Day, me hearties. http://ow.ly/6rsKD #ITLAPD ^MR

Baseball begins this year in the middle of Lent, giving us two opportunities for a fresh start. In that spirit, let’s take another look at 10 ways going to Mass imitates baseball.

10. Sometimes you stand and sing, other times you sit.
See the rest of the list…

(If you enjoy the intersection of faith and sports, check out my March Madness brackets for church-goers.)

Avast, me hearties — it be Talk Like a Pirate Day once again (Sept. 19). Check out this favorite post by Cap’n Mark that we unearthed for this special day.

In honor of opening day coming on the heels of Easter, here are the top 10 ways going to Mass imitates baseball.

10. Sometimes you stand and sing, other times you sit.
9. It can go into extra innings.
8. Hard to follow without a program.
7. Uncomfortable seats.
6. Sometimes you spend more than you want to.
5. Gotta know how to read the signs.
4. Come early to get good seats.
3. Long line for alcohol.
2. You’re preparing for post-season play.

And the number 1 way going to church imitates baseball…

Good luck to your team this year, unless you’re a Yankee fan.

It’s been a busy week on this blog for older posts. The latest one getting a spike in traffic is my review of St. Mary’s of Greenville, SC. As I type this, the St. Mary’s site is unavailable. If you are looking for more information about the South Carolina priest denying Eucharist to Obama voters, try these sources:

We the People have spoken, and the 44th President of the United States will be Barack Hussein Obama. This election ends a political process that started two years ago and which has revealed deep and bitter divisions within the United States and also within the Catholic Church in the United States. This division is sometimes called a “Culture War,” by which is meant a heated clash between two radically different and incompatible conceptions of how we should order our common life together, the public life that constitutes civil society. And the chief battleground in this culture war for the past 30 years has been abortion, which one side regards as a murderous abomination that cries out to Heaven for vengeance and the other side regards as a fundamental human right that must be protected in laws enforced by the authority of the state. Between these two visions of the use of lethal violence against the unborn there can be no negotiation or conciliation, and now our nation has chosen for its chief executive the most radical pro-abortion politician ever to serve in the United States Senate or to run for president. We must also take note of the fact that this election was effectively decided by the votes of self-described (but not practicing) Catholics, the majority of whom cast their ballots for President-elect Obama.

In response to this, I am obliged by my duty as your shepherd to make two observations:

1. Voting for a pro-abortion politician when a plausible pro-life alternative exits constitutes material cooperation with intrinsic evil, and those Catholics who do so place themselves outside of the full communion of Christ’s Church and under the judgment of divine law. Persons in this condition should not receive Holy Communion until and unless they are reconciled to God in the Sacrament of Penance, lest they eat and drink their own condemnation.

2. Barack Obama, although we must always and everywhere disagree with him over abortion, has been duly elected the next President of the United States, and after he takes the Oath of Office next January 20th, he will hold legitimate authority in this nation. For this reason, we are obliged by Scriptural precept to pray for him and to cooperate with him whenever conscience does not bind us otherwise. Let us hope and pray that the responsibilities of the presidency and the grace of God will awaken in the conscience of this extraordinarily gifted man an awareness that the unholy slaughter of children in this nation is the greatest threat to the peace and security of the United States and constitutes a clear and present danger to the common good. In the time of President Obama’s service to our country, let us pray for him in the words of a prayer found in the Roman Missal:

God our Father, all earthly powers must serve you. Help our President-elect, Barack Obama, to fulfill his responsibilities worthily and well. By honoring and striving to please you at all times, may he secure peace and freedom for the people entrusted to him. We ask this through Our Lord Jesus Christ, your Son, who lives and reigns with you and the Holy Spirit, one God for ever and ever. 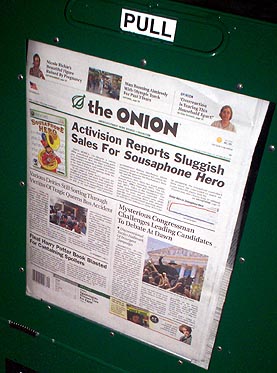 Looking for a chuckle or a reason not to always take your church work so serious? The Onion headline says it all:

Here are the top posts on this site from April – June 2007 in case you missed any the first time around. Or if you just want to relive the good times.

Error: Twitter did not respond. Please wait a few minutes and refresh this page.